At an event in Rio de Janeiro, singer Ivete Sangalo and executives from the largest Brazilian steel producer and Rock in Rio detailed the new Palco Mundo, which will have its Gerdau steel scenography 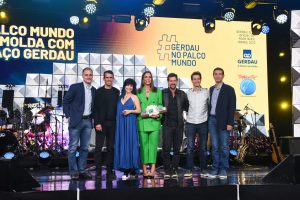 Singer Ivete Sangalo – the artist who most times took to the Palco Mundo in the history of Rock in Rio Brasil – was the spokesperson for an unprecedented partnership in the festival’s history. At an event in Rio de Janeiro, Gerdau and Rock in Rio announced details of the new Palco Mundo, the festival’s main stage, for the 2022 edition. The structure created for the City of Rock will have a more imposing and even more modern look with almost 200 tons of steel, equivalent to the manufacture of 200 cars, which will be used in the scenography of one of the biggest icons of the event. With a modular structure and more than 100 linear meters wide and a height proportional to a 10-story building, the stage will be the biggest of the festival. So that the public does not miss any details of the shows, the stage will be 30 meters high and 104 meters wide – the largest structure ever built since the first edition in 1985. Another feature is that the stage will consist of steel plates with apparent perforations, which will be worked with scenic lighting.

The choice of Gerdau – as the official steel brand of Rock in Rio and supplier of steel for the Palco Mundo – took into account aspects of sustainability and innovation. Gerdau is the largest recycler of scrap metal in Latin America, making the company’s steel a product with a lower carbon intensity than the sector’s average. In addition to the environmental aspect, the recycling process includes thousands of cooperatives and people in its income generation chain.

The partnership with the festival meets the remarkable transformation that Gerdau has been going through in recent years, seeking to be part of the solutions to society’s dilemmas and challenges. “We are very proud to take Gerdau steel to the biggest music and entertainment festival on the planet. The same steel that generates thousands of jobs recycles more than 11 million tons of scrap and provides mobility and construction solutions that will give the stage to some of the greatest artists in the world, bringing hope and joy to the thousands of people who attend the festival. This partnership with Rock in Rio reinforces the process of modernization and innovation that Gerdau has been through,” said Gustavo Werneck, CEO of Gerdau.

Steel is a 100% recyclable material, which can be recycled infinite times without losing its properties. Recycling has positive effects in mitigating climate change: it saves natural resources and reduces energy consumption and the emission of greenhouse gases. Currently, Gerdau, which has 73% of its production from scrap metal recycling, has one of the lowest average greenhouse gas emissions, of 0.90 t of CO₂and per ton of steel, which is approximately half the global average for its sector of 1.89 t of CO₂and per ton of steel, according to 2020 data released by the World Steel Association (worldsteel). By 2031, the company’s carbon emissions will decrease to 0.83 t of CO₂and per ton of steel. The company has also assumed the ambition to be carbon neutral by 2050.