Irresponsible and incompetent: Pandemic, deforestation in the Amazon, and threats to democracy by the government of Jair Bolsonaro consolidate a year of a negative image in the global press 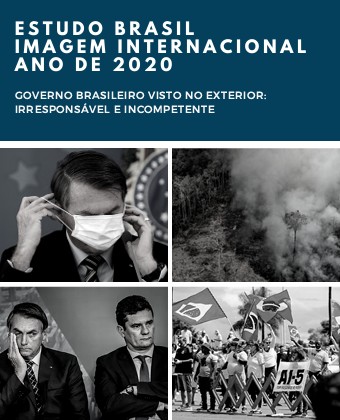 Almost all (92%) of the 1,179 reports in the international press that cited Brazil throughout 2020 were negative, generating an image index – iVGR (Value, Management and Relationship) of –3.38 (on a scale of 5 to -5), indicative of crisis. The level was maintained in the 12 months of the year.

The image of the government that prevailed throughout the year was  incompetent and vulnerable – qualities that were analyzed in the administration. In the ethical aspect, the attribute Irresponsible maintained an average of 20% participation throughout the year.

The study, produced by Cured & Associates – a consultancy specialized in image and reputation management – analyzed texts from seven international vehicles of recognized relevance and with a plurality of editorial line:  The New York Times and The Washington Post (United States), The Guardian and The Economist (England), El Pais (Spain), Le Monde (France), and Der Spiegel (Germany).

An image crisis starts when the indicator is below -2. Throughout 2020, the most undersized negative index was that of February, at -2.59. Between April and June, the height of the first wave of Covid-19 in Brazil, the country recorded its worst rates. The image returned to more critical levels from September, with very unfavorable coverage of the federal government’s environmental policy (Amazonia and Pantanal).

A total of 1,088 (92%) of the 1,179 articles published and 91 were positive (8%). Among the negative ones, 52% were related to the pandemic management. In the theme “others”, articles about the economic crisis in Brazil without the context of the pandemic and the violation of human rights stood out.

Among the 91 positive articles, positive expectations for the recovery of the economy and structural reforms, especially in the first quarter of the year, had greater relevance. Other topics that generated positive visibility were payment of emergency aid and tests with vaccines in Brazil.

The Covid-19’s coverage in Brazil throughout the year had 608 articles – 571 negative and 37 positive. The political administration of president Bolsonaro in the crisis it was the pandemic theme most criticized by the press, with 308 negative articles. The period between April and July was the most critical, concentrating 181 negative stories on the topic of political management of the pandemic. April was the worst month for the issue, alone with -4.08. Of the 37 positive pandemic stories in 2020, 12 on emergency aid and financial support to states and municipalities paid for by the federal government.

A sentence loaded with insensitivity by President Bolsonaro that caught the attention of the international press was “So what?” at the end of April, when the country was counting 5,000 dead. The image index for the theme “government political leadership for Covid-19” was -3.88.

Throughout the year, the coverage of environmental issues had 167 articles – 165 negative and only 2 positive, these on Bolsonaro’s thanks for the support of the British Prime Minister, Boris Johnson, on the Amazon issue. Among the negatives, articles about the destruction of the Amazon and the Pantanal accounted for 88% (145 negative). September had the worst index for Amazonia (-4.05). “Brazilian President Jair Bolsonaro supports the new land grabbing,” wrote the German Der Spiegel, on September 15. A few days later, Bolsonaro’s denialist speech at the 75th UN General Assembly’s opening session also gained prominence in the press.

The deterioration of Brazil’s image on the environmental issue began in 2019, with the fires in the Amazon. In 2020, the topic became more sensitive as of June. On the 23rd, The Guardian, The New York Times and The Washington Post they made reports in which “trillion dollar investors” warned Brazil that “dismantling” policies in the Amazon could affect new projects and trade agreements.

Coverage of political issues throughout the year had 259 stories – 247 negative and 12 positive (these about Bolsonaro’s recovery in popularity in August, according to surveys).

The international press highlighted the authoritarianism of President Jair Bolsonaro in attacks on Congress and the Federal Supreme Court (STF), in addition to his support for demonstrations for the closure of the two institutions. The attacks on journalists have also been shown abroad.