Ambassador Peter Wilson, who spoke about Brazil’s role in preserving the environment and the importance of fostering innovation during the first meeting of Blended Webinars 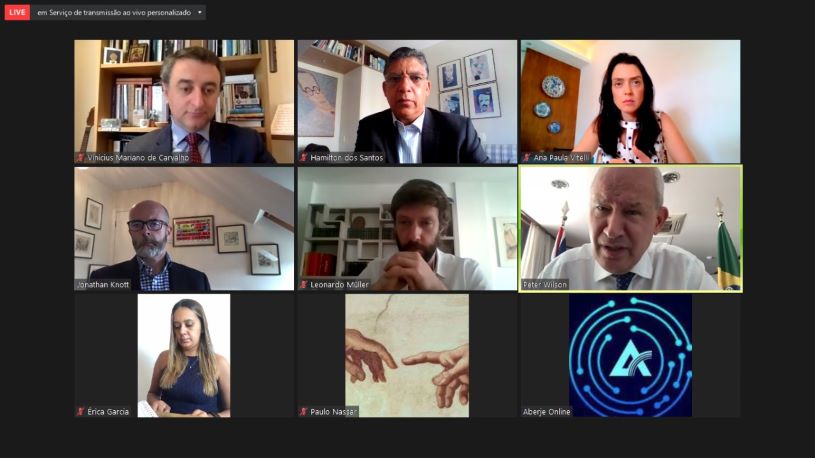 Brexit will pave the way for strengthening trade relations between the UK and Brazil. The point was made at the March 26 on-line meeting entitled Post-Brexit UK-Relations, the first Blended Webinar promoted by Aberje in partnership with the King’s Brazil Institute. The debate was attended by Peter Wilson, the United Kingdom’s ambassador to Brazil; Ana Paula Vitelli, President of Britcham, the British Chamber of Commerce and Industry in Brazil; and Jonathan Knott, British Trade Commissioner for Latin America and the Caribbean in the United Kingdom.

“Now there is a flexibility that was not fully present in the past,” said Peter Wilson. “Besides, there is an increasing strategic alignment in the way the two countries see the global scenario.”

“For the first time in decades, the United Kingdom will design and execute its trade strategy, making it possible to strengthen bilateral relations. Much of my job is to show British companies the opportunities to invest in Brazilian companies,” said Jonathan Knott, who will take over the UK Consulate General in São Paulo.

Britcham’s Ana Paula Vitelli was along the same lines. “The barriers that we, the British, encounter when trying to trade with Brazil are still significant, but what matters is the willingness to do things differently. Brazil is the largest country globally with which we still do not have signed the DTA (Double Taxation Agreement). The good thing is that when I talk to authorities about it, there is an understanding that this is desirable for both parties.”

Other points highlighted in the webinar were the cooperation between countries in stimulating innovation and the environmental agenda. Ambassador Wilson stressed the importance of governments and universities in supporting startups, incubators, and accelerators in the UK and Brazil. He assured that the British government is very willing to help this happen.

Regarding the environment, the ambassador mentioned the risk that deforestation could bring to global warming. “Everyone is very concerned with deforestation. As the Brazilian territory covers 60% of the Amazon Forest, we cannot run away from this discussion,” he argued.

However, in his view, these environmental problems must be addressed together. “We are willing to work with Brazil to overcome this problem and not against Brazil. Today, investors, consumers, and companies often refuse to invest, consume, or use resources that are not from ‘clean’ sources and following environmental policies. The world is changing very fast, and Brazil is part of the solution,” said Wilson.

The unprecedented initiative between Aberje and the King’s Brazil Institute will also discuss two themes in the coming months: vaccines for Covid-19 in April, and a new horizon for finance and business, in May. The public can previously access video content and submit questions to be addressed in the live webinar.