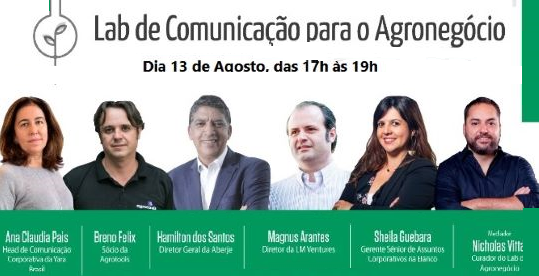 “It is easier for someone to be attacked by a shark than to contract a resistant bacterium by consuming meat.” Such a powerful but straightforward image helps communication professionals to reach the audience when they want to emphasize the importance of using technology in agribusiness for an increasingly urban population. That was one of the conclusions of the Communication Lab for Agribusiness, promoted by Aberje on August 13, which brought together communication professionals from major companies in the market in an online meeting.

The meeting addressed the disruptive technologies that have been revolutionizing agribusiness and discuss the best ways to communicate the importance of these tools to society. It was attended by Ana Claudia Pais, head of Corporate Communication at Yara Brazil; Breno Felix, partner of Agrotools; Sheila Guebara, Corporate Affairs manager at Elanco; and Magnus Arantes, director of LM Ventures. The event was mediated by journalist Nicholas Vital, curator of the Lab.

How to reach big and small producers

In the opposite way of the crisis, Brazilian agribusiness continues to show positive results, including breaking export records for some products, such as soy. Technology is an excellent ally of the sector and has significantly optimized the production system, both in maximizing gains and reducing waste.

Like other organizations, Yara Brazil – active in the plant nutrition segment, with a worldwide presence and a presence here since the 1970s – was forced overnight to replace the face-to-face model with the digital one. “Our back-office helped us make this change quickly with the producer, from the farm gate,” said Ana Claudia Pais, head of the company’s Corporate Communication.

By offering a complete portfolio of products, medicines, and additives that treat, control, and prevent diseases, Elanco promotes the quality of life of farm and companion animals. With almost 70 years of tradition in the animal health and nutrition sector, only recently has the company started to communicate with its public.

“People need to have the right access to information. In recent years, this industry has neglected communication, leaving an erroneous image and several myths and stories that have persisted for a long time,” said Sheila Guebara, Corporate Affairs manager at the company. “It is necessary to adapt the language of the sector to the reality of the consumer, and communication is fundamental to show the real importance of these technologies.”

The challenge: bringing the truth of the countryside to the city

For more than a decade, Agrotools has been offering digital solutions with 100% national technology to major players in agribusiness, reducing the distance between rural producers and companies established in cities. “In fact, it is like doing the best reading of the rural territory and being able to communicate that,” said Breno Felix, partner of the company. “Agrotools is out of the gate, trying to understand what is going on inside. We help the producer to communicate how well his business is done for those who live in the city.”

You have to tell stories, says Felix. “The Brazilian farmer takes care of thousands of hectares of forests, has to understand the climate, finances, people, the countryside, the veterinarian and comply with a heavy forest code. And after all this, he is seen as a villain. We have to tell another story,” he said.

“I don’t see discussions about food safety and food security or about the responsible use of soil natural resources at the same time,” says Felix.  “Our role is to help companies and producers to communicate their practices, projects, attitudes better, and care for nature, with the production of food on a large scale, healthily and responsibly.”

Innovate with the help of startups

No matter how good a company may be, it can always be improved with external contributions from intelligent people. The statement is Magnus Arantes, director of LM Ventures, a consultancy company for innovation and investment in early-stage startups.

Arantes introduced Agrihub Space, an innovation hub that connects large companies and startups to the entire agribusiness ecosystem (rural producers, federations, universities, etc.) to produce new technologies and promote the adoption of innovations. The initiative is from LM Ventures in partnership with the Federation of Agriculture and Livestock of the State of Mato Grosso (Famato).

“We are open to partnerships for the development of new technologies in projects such as climate mapping, the seedbed network, the livestock technology group, among others,” he says.

“In Mato Grosso, for example, more than 62% of the state’s area is preserved with forests. The agricultural sector has been delivering between 4% and 5% of yield increases per year for the past 20 years, something that no other sector does. Despite all the bottlenecks and problems we have record harvests, Brazil has now become the largest soy producer. We have to show the countless good things we have,” he said.