Victor Pereira, from Aberje’s Institutional and International Relations area, and in partnership with the associate Brivia, follows the Web Summit 2021 Lisbon, the world’s leading technology and innovation event, and brings insights from the conference to communication professionals 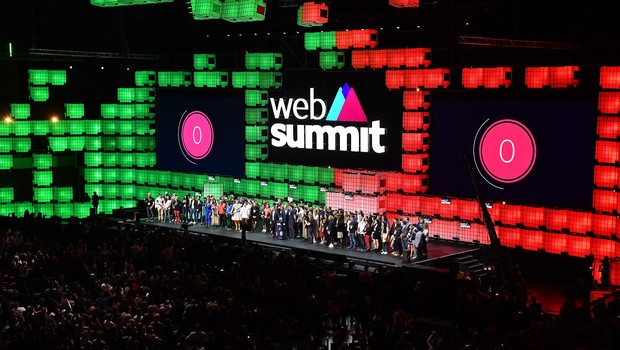 After a grand opening, the first day of the conference actually begins. You need to be aware of the schedule, plan the day and, most importantly, be flexible and adapt. Stages can be far apart, and going from one to the other can mean wasting precious minutes.

I started the day with a press conference by football player Thierry Henry, where the subject was “GOL”, more precisely, the Game of Our Lives initiative, which fights online hate speech. Along with the platform’s president, Dylan Ingham, and PUMA’s brand director, Adam Patrick, Thierry called for more action and collaboration from companies that control social media in moderating hateful comments – especially those made and directed at young people. The player is the first among prominent athletes to boycott social networks and promises to be out until online abuse is regulated. In Thierry Henry’s words, “they’re not trying to change anything.” Contrary to what coach Beard, from the TV series “Ted Lasso”, asks Thierry on S2EP9, I say: “Speak out, Thierry Henry!”. (If you haven’t already, please finish the text and watch “Ted Lasso”).

And regulation is a current issue when it comes to big techs in the event. On the “Fourth Estate” stage, dedicated to discussing the advances and changes in journalism, Yahoo and BBC News editors reviewed the main highlights of this year’s business and technology coverage. The ones who seem to be following a more exciting path are the European countries. The “go Europe” – synonymous with following a model developed in Europe – means more restrictions and regulation. Since the European RGPD inspires our Brazilian LGPD, one can think that Brazil is following an interesting path in this matter.

In addition, they also addressed how tech companies are becoming political in a new way. Suppose platforms were identified as a large field for disseminating messages on one side of the political spectrum in the past, today. In that case, they are accused of taking the other side by issuing restrictions and banning this type of content. Sounds familiar?

Those who imagine that the Web Summit can be very focused and specialized in the technology industry will be surprised at how themes related to media transformations are present on the conference’s stages. Discussion of the number of followers is essential, as the division between journalists and influencers becomes increasingly blurred. This was the starting point to the debate on keeping the “communication portals” open for digital native generations.

For Yasir Khan, the Thomson Reuters Foundation editor-in-chief, legacy media needs to learn to listen more than telling. In his words, “not listening is not an option.” When answering whether she considers herself more of an activist than a journalist today, The Shade Room’s political reporter, Judith Nwandu, revealed how she views, for example, her anti-vax followers. “Rather than insisting that people do as I say, I try to encourage them to ask the right questions about vaccination,” he said.

Simone Oliver, an editor of Refinery29, reinforced that it is necessary to have an opinion even in a world apparently controlled by the number of followers. “We will always be critical but not cynical,” he said.

Starting from much the same point, the next panel featured VICE Media CEO Nancy Dubuc, who explained that today people want coverage of who sounds like them. And that means having more local producers and journalists. VICE, which bets on audiovisual coverage, releases from 700 to 1200 videos a week globally and begins to offer a platform for content creators to use its tools.

Diversity and what to expect in 2026

Diversity discussions are also covered at the Web Summit. The “Women in Tech” initiative, for example, has an ample space dedicated to meeting women who struggle for greater representation in an industry historically dominated by men.

On the panel “Creativity needs Diversity”, the CEO of the Constellation Agency, Diana Lee, told how she helps her employees obtain greencards to work in the US. Lee also emphasized looking at platforms that are off the radar when talking to diverse audiences, such as China’s WeChat.

Finally, in an interview about the future of marketing and communications, Margaret Wagner, CEO of Merkle, said that among the main changes she would like to see in both areas is more “consumer control”, meaning consumers owning more control and decision on when and how to access the brands they love. What does this mean for us communicators?